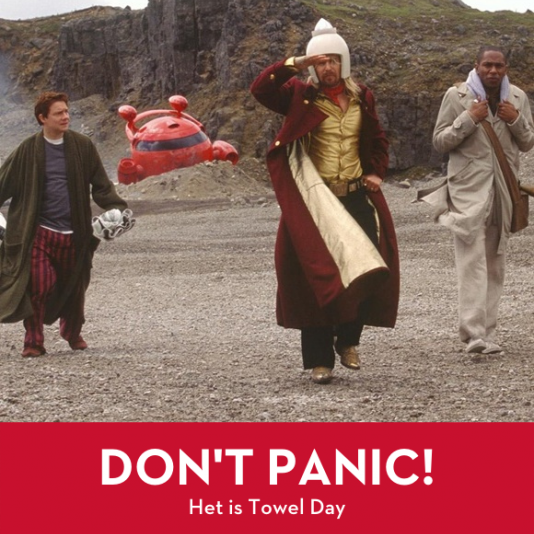 Wednesday the 25th marks the most important date of the year; Towel Day. On this day we honor the life of Douglas Adams, writer of the critically acclaimed science fiction novel The Hitchhiker's Guide to the Galaxy by bringing a towel with us everywhere we go. Being the science fiction fans that we are at Donner, we thought it important to highlight this hilarious novel that has meaning to so many of us.

The Hitchiker’s Guide to the Galaxy is one of the most absurd (and thus most hilarious) books within the scifi genre. The two wise lessons Douglas Adams teaches us are to never panic and always bring a towel everywhere you go. Many people aren't aware of how useful a towel can be while traveling through space. A towel can be wrapped around for warmth on cold planets, it can be used a sail on flooded planets and you can use your towel on sunny planets with beautiful beaches. A towel can of course also be used dry yourself off (that is, if it's still clean after prior use). In short: DON't PANIC and don't forget to bring a towel.

Adams released his first book in 1980 after hosting a successful radio show with the same title, the series was first released as a trilogy that consisted of six books. Our story starts with an earthling called Arthur Dent, whose planet (and house) is about to be destroyed by a group of bureaucratic aliens in order to make room for an intergalactic highway. What follows is an adventure where our hero travels to different places in the universe and meets the weirdest aliens, some of whom are known for writing poetry so terrible that it's considered torture in most parts of the galaxy. Arthur and his newly acquired friends also tackle life's most difficult questions: how did life start on earth, what lies at the end of the universe and whether or not Elvis Presley is still alive or not.

A must-read for those who can appreciate British comedy and science fiction. Fortunately for all, the entire series is now available as one complete book in English. The Hitchhiker's Guide is also available in Dutch but split into two books: Omnibus 1 & Omnibus 2. Check out our Science fiction section on our website, or come visit our bookstore in Coolsingel. But whatever you do, DON'T PANIC and always bring a towel with you.